I need a system.

I thought my pulling 42 tubs out of the attic to wash, sort, sell, give away or hang up for this season was going to be a fairly quick task.

Fairly quick task it was not and the tubs are still in the middle of my family room. All kids closets and dressers are in upheaval as we try on EVERYTHING, trade out sizes, and do more sorting and giving away.

Organization is not my forte although I LOVE being organized. I frequent the few places of organization in my house to relax. Unfortunately those areas include my "office" (loose term for the area designated for my laptop and bills and other accoutrements) and though our finances are painstakingly organized, not much else in there can be coined "relaxing". The other organized area is the babies' room (sans the closet) but for some reason it just kinda smells like poo in there all the time which doesn't fit in to my relaxation quota either.

So I need a system. Specifically, a system that isn't too daunting. Not like those "Deep Clean Your House With These Daily Tasks All Year." That's not fun to me. Simple. One big swoop. That's what I need. Or 2 big swoops a year even. I can take 2 out of 365 days to have a house in upheaval. But we're inching past 10 days and I'm losing my marbles.

Maybe if I quit feeding the kiddos they'll stop growing so fast. Then they could remain in the same size clothes for longer than 3 months. But then they'd probably cry a lot. And then I'd lose my marbles anyway so I should probably continue to feed them.

Thanks for allowing me to think out loud on that one.

Send me links. Send me systems. Send me a professional.

I'm sending myself to a nap so I don't have to look at these tubs anymore.
Posted by Suzanne at 12:34 PM 2 comments:

Sometimes being a parent is the easiest job on the planet. Like, per se, when they're all tucked so nicely in all of their beds, fresh from the bath, sleeping soundly with nary a fuss or an attitude.

And then they wake up.

And being a parent is no longer the easiest job on the planet.

Today has been on the calendar for a month. It has been talked about for a month (or longer). It has been the source of much anticipation and excitement. It was to be a Summer Waves day. For free (thanks to our church renting it out). And since we were able to go only once at the beginning of the summer, we have looked forward to this day for a long, long time.

But ye ole Buster Boy has been having a hard time as of late. He's coming into his own and having to figure out who he is separate from Big Sis since those two have been together his whole life. All 3 1/2 years of it. Until she ran off and left him for kindergarten.

We're trying to teach him to man-up (we start 'em early around here) and do things on his own. And he is getting better. He even went on a fishing venture this week all by himself with his buddy - no parents - no siblings. And he LOVED it.

But there are some big things he's still crawling up our legs about and we're just done with it. So he got an ultimatum. His first. Man up or no Summer Waves.

And let me tell you when we set this ultimatum, we never thought he'd choose AGAINST a day at the water park. But he did. And we had to follow through. Even though we had FAMILY plans FOR A MONTH to spend the day frolicking in the water.

So our family plans became 1/2 family plans. Daddy and the girls frolicked at the water park, while Mommy and the boys napped, mourned, and stared at each other in boredom all afternoon.

Jury's still out on if the lesson was learned. We'll find out next week when we run the same scenario. And if he quiver lip/puppy dog eyes me one more time, I'm through. Melt me like chocolate.

It would be so much easier to discipline him if he wasn't so darn cute. 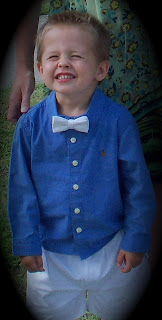 Welcome Fall. Or Autumn. Or whatever your name is.

Who am I kidding?

We don't have seasons in these here parts of south ga. We have summer. And then a little more summer. Then a few days of beautiful weather ruined by the sand gnats and then we're back to pre-summer again.

But darn it. I'm going to celebrate it nonetheless.

College football is in the air and this means it's time to change out the clothes from summer to post-summer (known to some as "Fall"). I don't know why I do this. It's pointless really. We won't be looking at long sleeved shirts for a good 2 months, and hoodies, OH MY DEAR PRECIOUS COZY HOODIES, not til Christmas....or after.

For some reason I feel the need to torture myself.

And I don't do this with my own clothes because the sad reality is that my little closet holds all seasons of my clothes. [insert violin music here]

Someday I will purchase clothes to update my 2004 wardrobe, but for now, it's the babies that come first. [insert "Hero" by Mariah Carey here]

So in my torturous assignment today, I got down 42 tubs of clothes out of the attic. And since the Twinzies are growing like weeds, I figured I should get out their current size clothes and their next size up. Of all seasons. And then wash them. All 42 loads worth. And then fold them. All 42 tons of them.

And really, I know I shouldn't be jealous of the wardrobe of a certain 17-month old. 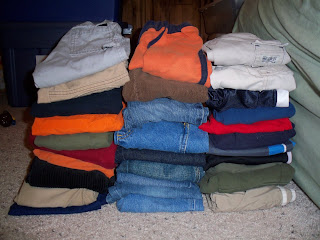 Is it really necessary to house 30 pairs of 18mo size pants? Does Wild Man really need to wear a different outfit EVERY SINGLE DAY FOR AN ENTIRE MONTH?

I mean, I know he's a fashion-forward kind of guy... 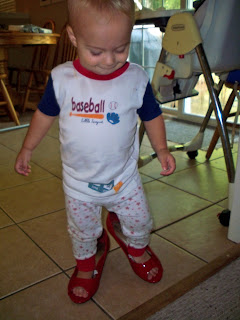 I guess the hand-me-down stars were aligned when this pretty stack of 30 PAIRS OF PANTS (have I mentioned that yet?) came together and landed in one's wardrobe.

Since he owns about 27 more pants than I do, I think I may sell them on eBay as "Celebrity Child Sells Pants for Charity" because we know all those Jolie-Pitts offspring gotta do something with their pants, right? And why wouldn't they want me to make a pretty penny off their name, right?

And maybe, just maybe, I'll take that money and go buy myself a hoodie. 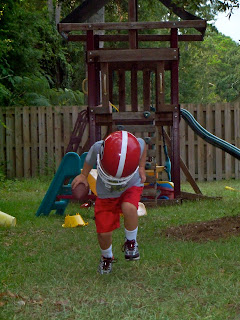 "Right here, right now, God has placed you to do what you do best. Go all the way." - Coach Taylor 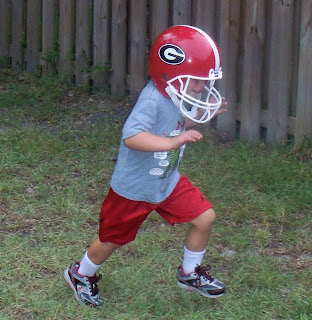 "Too late, play's over. You waited too long to make a decision. Now we lost the game because of you, now we're not going to state, and now the whole town of Dillon hates you. FACT." - Tim Riggins 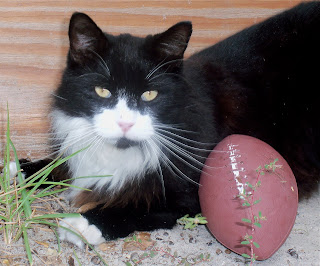 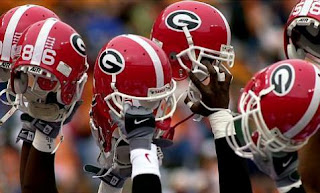 "I know I'm far from the most talented player on this team, but it seems to me that we can either win together, or we can lose alone. And I just want to say it's an honor and a privilege to be here with y'all." - Landry Clark 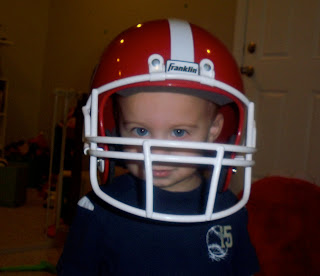 There are many unique perks (and, uh, other not so much perks) that come with being a parent to twins. The most obvious is that we have TWO babies, as opposed to one. And anyone who's had ONE baby knows how much stinkin love you have for that child. It's simply A.M.A.Z.I.N.G. to have two. ALL difficulties of "twindom" dwindle in comparison to the coolness of birthing a set of best friends.

I questioned God on MORE than one occasion at His plan for us to have twins when we already had two in the first place. I don't believe there was a thankful bone in my body when I heard the news (and my early blog posts from those days show it). But the minute they came out I was overwhelmed (to say the LEAST) with gratitude that we were chosen to have TWO babies.

(Can you tell I'm still a bit shocked? Even 16 months later. I hope that feeling never goes away.)

I read no books about parenting twins (HELLLLOOO!! I had enough anxiety as it was!!) so I was banking on instinct and the fact that I had successfully (up to that point) parented two before. How difficult could it be to do it again - double time?

The minute The Dynamic Duo entered the world, instinct DID take over and without any words needed, Carter and I officially became Team Powerhouse.

Or at least that's what we like to call ourselves.

I should totally get jerseys.

Everything that happened from that point on was dealt with from an "us" standpoint. There was no, "I'll take this shift and let you sleep."

The Big Win? Making it through a day.

When the babies learned to sleep through the night, our whole world changed. The benefits of sleep for Team Powerhouse (and our little mascots) were glorious! And though the Team worked hard during the day, we no longer had to show up for the game in the middle of the night.

I heard a cough. A weird one. A couple more. My internal radar went off and I went to stand in front of the babies' door to listen closer. It took 3 seconds and then I barrelled through the door calling for my Teammate in a panic. Wild Man was choking on his vomit that looked like it exploded all over the room.

And then it happened.

Team Powerhouse showed up for the game.

No words were issued. Just a moment. A look. And we shot into gear.

Each of us one-handed working with baby on the hip. Me bathing, dressing, calming Wild Man. Husb stripping bed linens, washing out gunk and starting the washing machine. Me holding two babies on the couch, watching Baby Einstein. Husb cleaning and disinfecting nursery. Me standing over washing machine desperately waiting for "Lamby", the required lovey, to finish washing. Husb getting Tiny Miss back to sleep and Wild Man's bed ready.

The chaos subsided. I gave myself a firm chastising for giving Wild Man a new food for dinner knowing his acid reflux CANNOT HANDLE UNFAMILIAR FOODS. And then we climbed into bed, high-fived each other for a good game, and went back to sleep.

It's good to see that Team Powerhouse still has it.

Though I do hope to keep all game times during daylight hours from here on out.
Posted by Suzanne at 7:22 AM 3 comments: 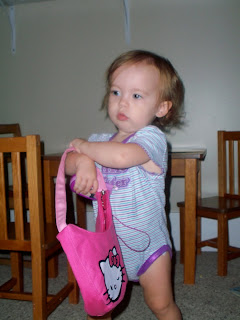 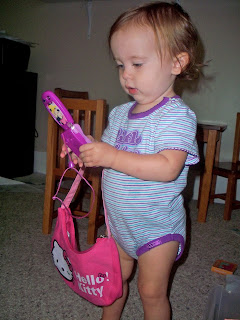 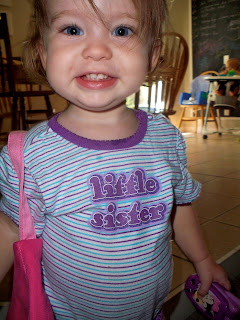 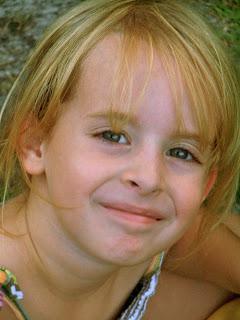 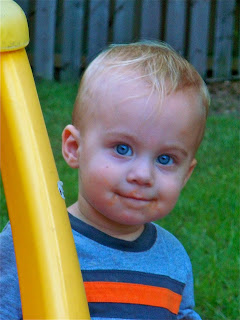 The 2 in between were being goobers.
Posted by Suzanne at 8:57 PM No comments: 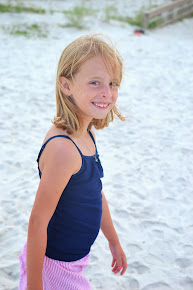 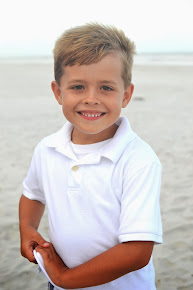 Buster Boy is a wrestler by day, cuddler by night. He loves baseball, fishing, and roping anything around in pure cowboy fashion. 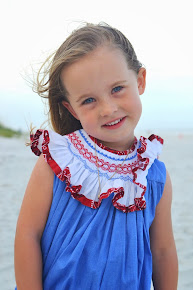 Tiny Miss, of the Dynamic Duo, twirls her Princess Ballerina self all around in her high heeled shoes. She's sneaky, she's purposeful, and she gets away with all of it by fluttering her eyelashes at Daddy. 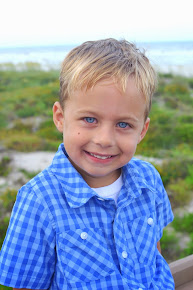 Wild Man, of the Dynamic Duo, can magically turn brown hairs into gray. His personality is strong, his muscles even stronger. He plans to be a firefighter, a helicopter pilot, or Sybil.